The Southern Elephant Seal is the largest of all seals in the world. The males can weigh up to 8,500 lb and the females 2,000 lb. The males are generally twice as long as the females. The males can be up to 20 feet in length. They are a dark brown to light gray in color just like elephants.

Their heads are much larger than any other type of seal which is a good match for their bodies. The males have what appears to be a trunk that protrudes from the front of their face, which is another reason why they have this particular name associated with them.

These particular seals love the rocky island shores out there around the Antarctic. They are found in the various oceans around the world as well. There is approximately 650,000 of them out there. They love to spend most of their time in the water so they need to be in locations that have plenty of food for them as well.

It isn’t uncommon to find hundreds and hundreds of these seals enjoying the company of each other. They can be found on land enjoying the sun as it shines down on them. They also like to slide along the rocks even though to onlookers it seems like they are struggling to do so. They definitely find it easier to get around in the water which is why they spend so much of their time in it.

They are known to make very deep and loud sounds that are similar to roars. These will increase by the males as mating season approaches. They make these sounds to gain the attention of the females and at the same time to warn other males that they want to stake a claim in that area. 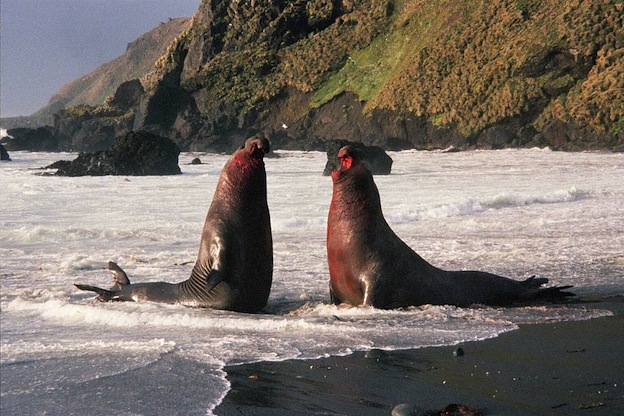 The main food sources for the Southern Elephant seal are squid and a variety of fish. If these food sources are scarce they may consume small sharks that are around their natural habitat. They can dive into the water and not come back up for up to two hours.

They have been recorded more than 3,000 feet below the surface in order to find the food they need to survive. A great deal about what we know of such behaviors in the water are the results of satellite data.

There are breeding grounds that the Southern Elephant Seal will move to in August and September. They males will become very aggressive with each other in order to win the right to mate with the females. They may fight each other with their trunks and with their teeth until one of them submits. It isn’t unusually for a dominate male to have up to 50 females that he will mate with in a given season.

The pups are born in the summer, generally only one per female. The milk they receive from their mother contains high percentage of fat in it. This allows them to be weaned when they are few weeks of age. They will gain three times their birth weight during that period of time.

It is estimated that there are approximately 650,000 Southern Elephant seals left in the world. This is slightly more than just a few years ago which indicates that the current conservation efforts and awareness are helping. However, those numbers are still lower than a comfortable zone. As a result more efforts have been put in place to at least protect their breeding zones.