There are plenty of fun facts to learn about seals. They are very interesting creatures that you may think do nothing but lie on the land or seek food in the water. There are 33 known species of pinnipeds found in various locations around the world. They gray seals are very popular and you may find it interesting that many of them breed in Scotland annually.

You will find many species of seals live in very cold environments. They are able to do so comfortably due to the thick layers of blubber they have under their skin. This fat helps to keep them well insulated. Many people lump seals into the same category as whales and dolphins. While they do have quite a few similarities, there is one fact that sets them apart. All species of seals give birth to their offspring on land rather than in the water.

It may be alarming when you see what you think is a dead seal. However, there is a very good chance that it is simply sleeping. Their breathing slows down significantly to save energy.

The largest of all seals is the Elephant Seal. They spend longest periods of time on land. Depending on the type of seal, they can dive at least 1,000 feet. Some of them can dive up to 3,000 feet. It is believed they can go deeper than that if necessary for food but it hasn’t been verified by experts. Seals can remain under the water for up to 30 minutes before they have to surface for air.

The milk that the females offer their pups can be up to 50% fat. This accounts for the astonishing growth of them. When researchers first started observing pups they couldn’t believe that they would gain 3 to 5 pounds per day. Yet this is possible due to the amount of fat that is in the milk they drink. They are generally weaned from 3 to 6 weeks of life depending on the species of seal.

Seals don’t really have any defenses that can do much against predators. They can bite but that is no match 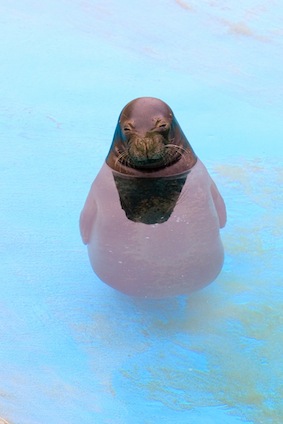 for what wants them for lunch. You may view seals on the land and think they don’t have much room to call their own. Yet the stay extremely close to each other as this is their main source of protection. The often stay in groups that contain several individuals in them.

Even so, that doesn’t change the fact that hundreds of thousands of seals are slaughtered needlessly each year in Canada. This is a huge issue of political debate among various countries. The fact that these hunts take place all year long and include the killing of baby seals is an outrage. The fact that the laws are very loose regarding such slaughtering means that it continues to be acceptable in the Canadian culture.

Now that you know some great facts about seals, it can be fun to explore more on your own. You can learn about seals as a whole or you can choose a particular aspect of them to learn about. The more you narrow down your search for information the more specific you can get with it. You can also find areas of seal conservation that you would like to pursue once you know the facts relating to the issues these animals face.