If you had to choose only one word to describe the Weddell Seal, it would like be that they are cute. This species gets plenty of attention due to the physical characteristics that it offers. They can grow up to 11 feet long and weigh up to 1,300 pounds. The females tend to be a bit larger than the males. They are a bluish gray in color and feature very long whiskers as well as small cute noses.

Of all of the seals out there this one lives the furthest South. Many of them live in an area called McMurdo Sound which is almost 800 miles away from the South Pole.

You will find the Weddell Seals in large groups on the icy shores. They spend much of their time though in the icy cold waters around them. They may be hard to see because they will stay well below the surface of the ice. It is a myth that they don’t need to come to the surface to breath. What they do is find cracks in the ice where they can take in a couple of breaths.

They have been seen lying on their backs on the ice with their front flippers over the stomach. Their mouths are open and it appears that they are holding their stomach in laughter. Such humanistic characteristics are part of why these seals are so widely adored. They are very vocal, especially the males. It is believed this is to continually stake their claims on territory they call their own.

The Weddell Seal isn’t a picky eater but it does have its favorites. Among them are krill, fish, and squid. They tend to relax during the day even when they are in the water, then hunt for food at night. They have very good eyesight. They also have great sensations in their whiskers that allow them to pick up vibrations around them.

They can stay under water for up to an hour while hunting for food. Research shows they have the ability to collapse their lungs while in the water so they don’t require as much air. They have sharp teeth but they tend to swallow their food whole until it is too big, then they rip it into manageable pieces. 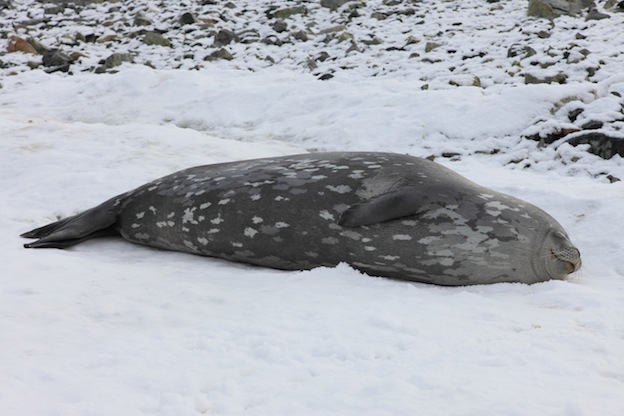 The males fight for the right to reproduce with the females. The stronger, dominate males are able to choose the females they want to mate with. They will be with many during one mating season. The pups are born in either September or October. The mothers feed these pups milk that are 70% fat which allows them to grow very fast. They are approximately 60 pounds at birth and when they stop nursing at six weeks of age they can be about 200 pounds.

Even though conservation groups keep a close eye on the Weddell Seal, they have decent numbers. There are about 800,000 of them out there right now. Older Weddell Seals often suffer due to wear on their teeth. They use them to scrape away at the layers of ice out there in their natural habitat. Some conservation efforts have included moving these older ones into captivity.

There is plenty of documentation of humans touching Weddell Seals because they are so calm. It is due to this fact as well as how appealing they are that they are often the types used for books, movies, and cartoons. People do need to be careful though approaching any Weddell Seal as they are still wild animals.

In the past Weddell seals have been hunted for their meat, oil, and their skins. Such events are deemed illegal in many areas but they still continue to take place by skilled hunters looking to make some money.