Researchers have been able to observe seals in their natural environments to fully understand the reproduction process. As breeding season emerges, the males will start to turn on each other. The tension and the aggression that they display are their way of being the one that the females of interest will turn to. There is evidence to suggest the males are producing more hormones during this period of time which the females are attracted to.

The females will develop an egg that is protected in the uterus by fluids. She too will produce more of her hormones and as a result she is going to take an interest in the males that are around her. The dominant of the males are the ones that will get the right to breed with the females. The males don’t even eat during this period of time because they don’t want to risk other males trying to breed with a female they are interested in.

The males don’t mate with only one female though. Instead, they will mate with as many of them as they possibly can. It can take up to nine months for the pup to be fully developed and then born. When the pup is about to be born the female will make her way back to the breeding grounds.

The reproduction process for seals takes place either on land or in the water. What is very surprising is that the young are all born on land rather than in the water. The mothers are very caring towards their young pups. They smell it and make a call that their pup will instantly memorize. It is through the smell and those calls that they will be able to continually communicate with each other and to find each other. 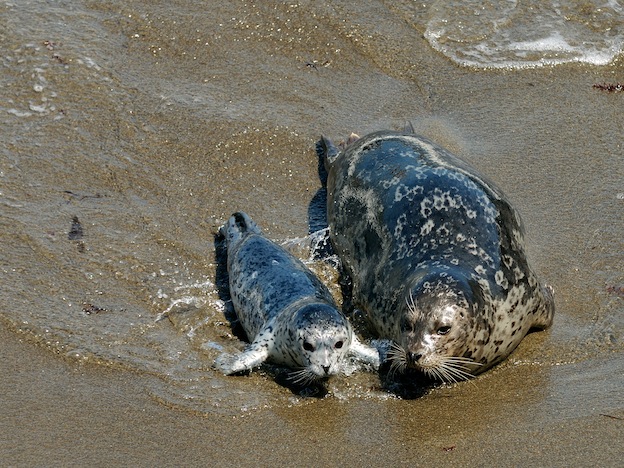 Mother Harbor Seal and Her Pup at Point Lobos, California

These behaviors are extremely important during the first few moments of life. If the mother doesn’t smell and recognize her offspring, she will refuse to feed it. As a result these pups will starve to death. Sometimes the males are too aggressive in the area and they will trample the offspring if the females can’t protect them. Some of the pups have been able to nurse from other females when they are abandoned by their own mother’s. This generally will only occur when a female has lost her own pup.

The pups are fed milk from the mother’s body for the first month of life. They can gain more weight during this period of time. It is exhausting for the mother to feed like this. In fact, she can lose body mass during that feeding process. The milk is very rich in fat so that the pups develop the layers of blubber they need to stay warm enough. The mother doesn’t leave the pup during the first month of life to get food herself. When she does have to go, she won’t return to the pup for further feedings.

What researchers have found is that the pup is able to survive on what it has been fed for about two full weeks. At that point the urge to eat occurs and they will move to the water where it will feed itself. Not all species of seal mother’s fast though so they take their pups with them into the water while they feed.

The live span for a seal depends on the species of it and the natural environment it is in. Some of them have been known to live up to 40 years.