The Northern Elephant Seal is smaller than those from the Southern part of the world. They are very large and the males have what is similar to an elephant’s trunk on their face yet it is very short. The males are very large with a weight of up to 5,000 pounds. They can also reach up to 14 feet in length. The females are much smaller when it comes to weight with only about 2,000 pounds. They are shorter too at only 12 feet.  These seals range in color from light gray to dark black.

You will find that the Northern Elephant Seal has quite a geographical range that they cover. Some of them live where it is cold including Alaska while others prefer the warmer climate around Baja California. They are known to migrate from one area to the next too.

When you look at the eyes of a Northern Elephant Seal, you will notice that they are quite large. They are also wide and very dark which works to their advantage when it comes time to find their prey. There are tons of different food sources in the water for these very large seals. They include squid, fish, octopus, and even small sharks.

They love to hunt for their prey at night and they can go to the depths of the oceans in order to find what they are looking for. They tend to eat much more as summer approaches to build up their fat reserves. As summer moves in they will molt so they have to stay on land for up to a month. During that period of time they will live off the fat on their bodies. 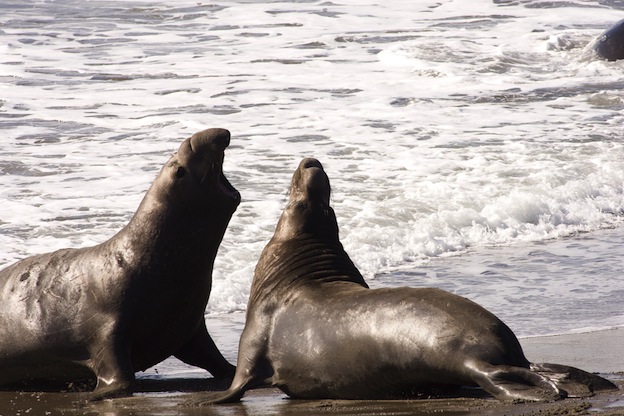 You will hear extremely deep and loud roaring sounds coming from the males when it is time to mate. The males are extremely competitive when it is time for mating. One male can earn the right to mate with 30 to 100 females in the group. The males head off first to the mating grounds where they will battle each other before the females start to arrive.

Those males that are the most powerful will have a certain region that they cover. It is not known what makes some females stop in these areas of a bull while others move on to another location to find a different male that they are interested in. Research also shows that the majority of the pups are from the same males. More than half off all the males in a given group will never mate.

It takes from 10 to 12 months from conception until the pups are born. Females occasionally have twins but if so one will be left to die. They nurse their one pup four the first month of life before they go in search of food for themselves. The pups will remain on the shore for two weeks living off of fat reserves. Then they will move into the water to hunt on their own.

At one time there were less than 1,000 Northern Elephant Seals out there. That was in the 1970’s but now there are almost 100,000 of them. This increase shows that such conservation efforts really can work. There continue to be environmental problems, including global warming that threatens the Northern Elephant Seal.

The number of Northern Elephant Seals is very low due to being hunted by humans. Another common problem with them is that they are highly susceptible to disease and viruses. This tends to occur more often in captivity than in the wild though and it is believed to be due to conditions presented by human interactions.