The Harp Seal is one that has lots of white fur on it. They also can feature areas of light brown and even some black. You will notice when you observe a group of Harp Seals that they have very different patterns of color from each other. The young pups are even sometimes mistaken for baby polar bears when they are alone. Full grown, they can be about 5 ½ feet long and weigh up to 300 pounds.

You will find the Harp Seals along the coasts of the Atlantic and Arctic Oceans. It due to the fact that they live in the coldest regions that they have plenty of thick fur as well as layers of blubber underneath it for insulation.

This particular type of seal moves around often in search of food. Their patterns of movement have been recorded for decades. For the most part they are consistent unless there are environmental factors that require them to make some type of adaptations at that time. When food is in short supply in one area, the larger groups of Harp Seals may break up into several smaller ones. This way there is more of a chance for them to survive.

The diet for these types of seals consist of small fish and invertebrates. They aren’t very picky though and they will consume whatever they have to from the water in order to survive. 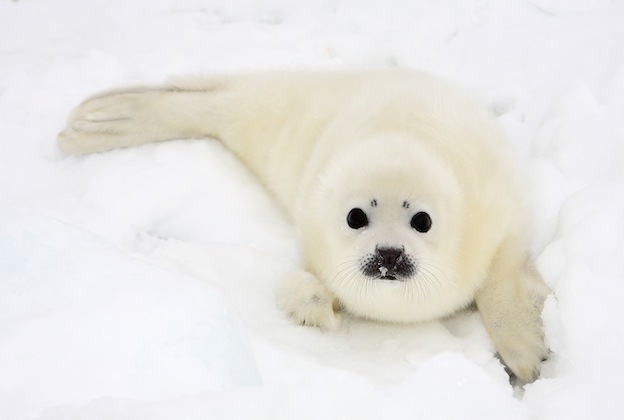 A Harp Seal is able to reproduce when it is between 5 and 7 years of age. Males end up courting the females on the ice but then move into the water for the actual act of reproduction to take place. As a result there is much that researchers don’t know about this part of it. What they do know is that it is possible for the embryo to be there but not attached to the uterus. It will attach to the uterus several months down the road.

The dominate males dictate who will end up mating with the available females. It is common for one male to mate with several females. The pups are born around February each year and a quick bond is made through smell for a pup and a mother. The milk she feeds on demand to her pup is 48% fat so the pup will grow very fast.

The nursing only takes place for 12 to 14 days though and then the pup is left to take care of itself. The mother leaves to fulfill her own need for food as she will have gone without during this span of time. It is very sad to watch these pups cry out as they are left alone. They become quiet in time though to conserve the food in their body.

Even then, they aren’t very good at swimming so they are very vulnerable. Many of them become prey to other animals including polar bears. A large percentage of them end up drowning in the water as they don’t have any one to show them how to swim and they may not be strong enough.

In the past the number of Harp Seals has dropped very low due to severe hunting. Mainly this was taking place in Canada. However, with conservation efforts in place around the world they have been able to increase their numbers over the past two decades. There are still too many of them being killed regularly around Canada though where it remains legal to do so.

A healthy Harp Seal can easily live in the wild for up to 30 years. However, they are often injured due to fishing nets that they get tangled up in. Global warming continues to be a problem for them too. As the layers of ice melt, their natural environment is being taken away from them.